Do you remember the movie Total Recall? Or the book it was based on: We Can Remember It for You Wholesale? … The premise was that artificial memories were inserted into people’s brains. And now, ladies and gentlemen, we can do it for real.

That’s right, scientists have implanted false memories into the brains of mice so that they have a negative, fearful response to an environment which is completely harmless.

While it may sound complicated what this experiment shows is that the mice have now formed a false association between the pain experienced in Box B and the environment of Box A. In reality they should have no reason to act fearful in Box A, but the false memories tell them there is.

Limitations: Obviously this research is relatively new and it’s a long way off creating full life memories but it’s certainly a start. At this point the study is limited to eliciting only a fear response and the memory recall is based solely on our interpretation of the mice’s actions. This means there are many aspects that we can’t possible know; like what is the mouse actually recalling?

Medical Implications: The medical implications of this technology has already been cited and primary amongst them is Post Traumatic Stress Disorder (PTSD). By ‘editing’ a person’s memory it might be possible to remove these kinds of debilitating memories and allow people to live ‘normal’ lives. Similarly phobias could be addressed using this technology by falsely creating a positive association with the focus of the phobia.

Science Fiction: The concept of memory implantation has been covered by multiple science fiction novels and movies, the two I mentioned earlier are the obvious examples. This technology has many applications outside the medical arena:

–       Brain washing: How better to control a population then to control people’s memories and thoughts? You could eradicate entire rebellions by ‘inserting’ positive memories of yourself into the upriser’s heads. On the other hand you could make people hate your enemy by inserting false negative memories as well.

–       Manipulation: Similar to brain-washing but how to make that special someone fall for you? Simply insert some romantic memories. Perhaps you even saved their life once?

–       Torture: By controlling the very thoughts a person has a potential abuser could torture a victim not just physically but mentally as well.

–       Training: Rehabilitating repeat offenders could involve ‘editing’ a person’s memories and therefore their behaviour. Associate an unwanted behaviour with a bad memory and the person is unlikely to perform the behaviour again.

This research definitely sits on the very edge of scientific boundaries well as ethical boundaries. How far is too far? When does medication become manipulation? I’d love to hear your thoughts on the ethical implications as well as how this technology could be used in today’s science fiction, let me know in the comments section below. 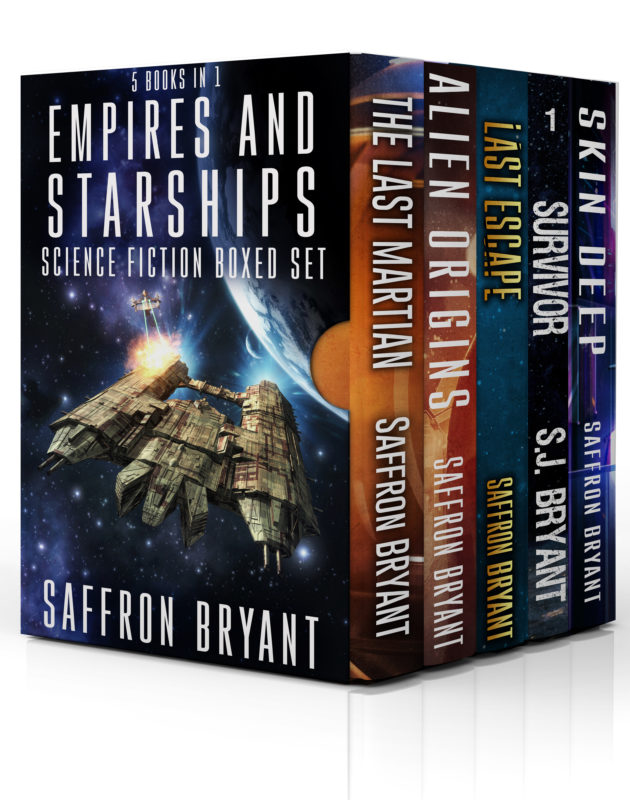 A value-pack of Saffron Bryant's most popular titles.

Whether you're looking for interstellar bounty hunters, kickass heroines, action, adventure, or just a fun read - this is the set for you.

Survivor: For eons a dark force has lurked inside Archalon, waiting. In 2354, the Confederacy set it free. Now Nova is the only one standing between the human race and total annihilation.

Last Escape: An underground organization is forcibly harvesting emotions from innocent people-who will stop them?

Skin Deep: Ravyn must defeat a corrupt government with just the help of seven dysfunctional robots.

The Last Martian: One man alone in space. Time is short, and space is deadly.

Alien Origins: The truth behind the origins of human civilization has laid buried for centuries. Until now.

Empires and Starships is an action-packed collection of 5 sci-fi books that will have you hooked. Get your copy today!